This is a fundamental question for which everyone in every culture must have an answer. Today we can infer knowledge from  fundamental Research in theoretical and experimental particle physics, but it is evident that in the past people were fascinated by mythic stories. These ones serves more than one function, the first was accounting for the origin of the world and its people and the second was providing a sort of “justification” about the order of things. 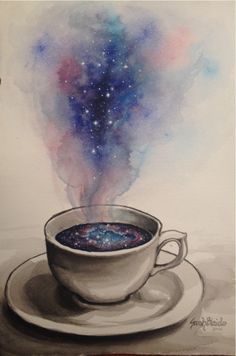 In the past centuries cosmogony (reasoning around the account of the origins) and cosmology (studying the systematic order of things) were linked together in a way that people were able to bind. Nowadays the situation is slightly different, cause our modern culture has forgot (or lost forever?) these liaison preferring the science of physical cosmology.

Traditional usage of the word “cosmology” implied an underlying order that governed bot the the universe and humanity (implying some sort of supernatural level of existence) but the modern usage of “cosmology ” in the sciences means that the object of investigation of science is the entire universe as a whole. This discipline fully entered in science from the 20th century when physicists tried to solve Einstein’s equation of general theory of relativity for the Universe as a whole by making simplifying assumptions. This choice need to specify a model of the Universe and the solved equations how it has evolved in time. This is the main reason why present cosmological models needs to firstly be based and tested after on a large amount of empirical and quantitative data.

Let’s start with the theoretical frame of cosmology: all began in 1916 with Einstein’s general theory of relativity where gravitation is bounded to space and time: matter, space, time and gravity are indissolubly linked together. And by this assumption geometry and mathematical physics start to have common bases; without distinctions, where gravity is in fact what causes the curvature of space and time caused by the presence of matter. In other words, this inner relationship is what will marks the beginning of modern cosmology.

During the first year Einstein made a set of simple and reasonable assumptions about the properties of the Universe: it was isotropic (looks the same in every direction; i.e the cosmological principle) and homogeneous (on large scale there are no relevant differences) to grant that there are no special preferred observational frames of reference. But later on his mind, after intensive studies and numerous reflections on equations results of these precise conditions, he arrives to another result: the Universe was no-static.  This was confirmed by the fact that to obtain a static solution in which the Universe remained the same over time, Einstein had to add and arbitrary constant to the equations.

The velocity of galaxies are relatively easy to calculate if we think on how the the Doppler effect works. Imagine that you are walking in the street and then you heard an ambulance some street away from your position. If the siren is traveling away from you the sound pitch will be lower and the contrary effect will happens if you’re reasoning vice versa. Having in mind this example will easily show why the light of a galaxy that is traveling away from us has a lowering frequency and a shift toward the red end of the spectrum (this is why this effect is called red shift). From measured changes in frequency (by spectroscopy analysis) the velocity of the galaxy can be calculated. Measuring the distance to such galaxy is more difficult, but it can be accomplished if you correlate the brightness to some other physical properties and then use this parameter to calculate distance.  The ultimate step is to collect the set of red shift and measurements of distance to show its direct proportionality to velocity.

Except from local motion it was found that every galaxy observed was in fact receding away from us and reminding the cosmological principle we can infer that every point is becoming fainter from every other point, proving that the universe is expanding. From this frame we can derive two important conclusions. The first is that the general relativity is the theory that explain this phenomena, and the second one is that if time moves forward the Universe is expanding, then the opposite effect of moving backward will reduce it at a small dot, how it was appear approaching to zero.  The time at which this occur might well be interpreted as the beginning of the Universe: a very hot and dense phase.

The proposed existence of this hot dense phase offered the opportunity to add more physics to these cosmological models because such hot dense conditions are expected to guarantee the creation of nuclei (nucleosynthesis).

Part of the problem is to determine properly the conditions found in the early Universe (around 100 and 300 seconds after its formation) and the other part of the problem is to calculate nuclear fusion reactions properly. In the early Universe, lighter elements were formed and they consed in starts (elements lighter than iron) and supernovae (heaviest elements). This is clear to infer if we know that at the early time of its formation the temperature was too high to any nucleosynthesis to occur, but when the Universe cooled there was a lack of energy necessary to create heaviest nuclei. An here we arrived to the big bang narrative… 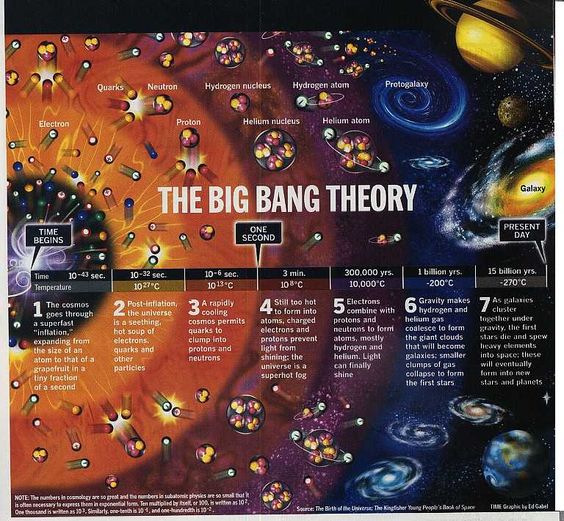 In the beginning, all of the matter and energy of the Universe existed in a single point of infinite temperature and density. Space and time came into existence as this point started to expand. At the unimaginable temperature and density found in the early Universe, matter and energy as we know them did not exist, being found instead in the form of an undifferentiated primal substance. The laws of physics as we know them likewise did not exist, all fundamental forces being merged into a single unified force.

As the Universe expanded and cooled, matter and radiation separated out while the unified forces sequentially broke into the forces as we know them. As the Universe continued its overall expansion, gravity accumulated some of matter into stars and galaxies, which then evolved through their own life cycles, forming all the heavy elements along the way. Elements up to iron were formed by fusion in regular stars, while in the meanwhile the explosion of supernovae formed the heaviest ones. We are a results of that phenomena because eventually these elements found their way – patiently, waiting generations – of new stars systems, including our own, where conditions of the planets earth gave rise to the origin of life. Life then went to evolve into the present global ecosystem , while the Universe continue its expansion. But no one yet know how much it will last…

Actually all of this is connected to what has happened today at CERN, the European Organization for Nuclear Research, physicists and engineers are working to cross the level to understand the fundamental structure of the Universe. By efficient and super powerful LHC machine – the world’s largest and most complex scientific instrument capable to study the basic constituents of matter – the fundamental particles collide together at close (99,9%) to the speed of light.

The process gives the physicists clues &/or sharper questions about how the particles interact, and provides insights into the fundamental laws of nature. Today you might know that some hours ago, at 8pm, LHC restart again with the newest 2017 circulating beams of protons…I’m excited even to write it, because this was the first time in 2017 after the extended winter technical stop! I’m wondering what the four experiments (Cms, Atlas, LHCb and Alice), placed around the 27 kilometers of the ring, will reveal us in the upcoming weeks 🙂

View all posts by lizhalfon